For the launch of my last book,  “Bicycle Dreaming” I painted a dozen of posters, and also built a life-sized sculpture. 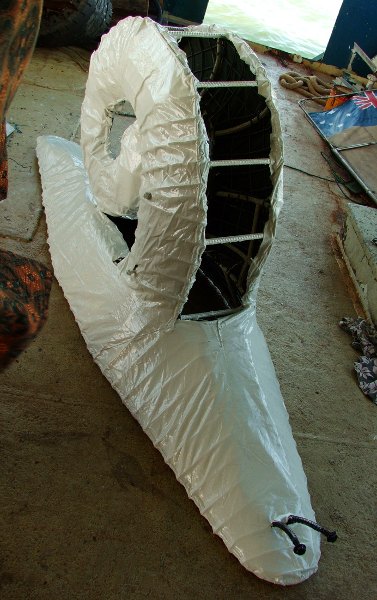 Frame was welded reo-bars, covered with fencing weld-mesh. Over the frame I stretched canvas and stitched the fabric to the frame. Two coats of polyester resin stiffened the fabric. Basic undercoat was industrial epoxy paint. I seem to have plenty of it lying around, leftovers from the jobs.

All other paint was acrylics.  Apart from  the initial welding I did all the work on the back deck, at home, on the boat.

“Bicycle Dreaming” is a book about cycling in the Australian outback, so some of the patterns appear to come from aboriginal art. In fact the details  on the snail come from a real animal, as captured by Ernst Haeckel in his “Kunstformen der Natur”.

Final step on the snail was wrapping a strip of old car tyre around the body. Bicycle half of the sculpture is welded water pipe and secondhand bits and pieces of my recumbent bicycles. In the background, on the bench, you can see another machine under construction, one of six or seven I have built so far. 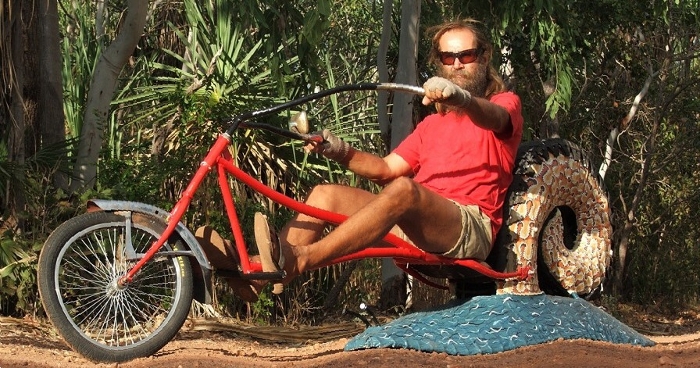 For the photo shoot I borrowed a ute and we drove the sculpture to Holmes Jungle in the northern outskirts of Darwin. We got some dramatic photos from it, too.
Sculpture was a success at the book launch, and several friends chipped in and bought it for the Railway Club to place in their playground. Kids promptly vandalised it, but the snail itself is still standing there in the grass.

All photos by Nat, from smallestforest.net

One thought on “Snail bike sculpture”